What a complete disaster! You would have thought with such an auspicious name as the Cook Islands, that this was going to be a great meal. Sadly not.

But a cook should not blame her kitchen implements. It was probably  a combination of factors - poor choice of recipes and a distinct lack of the "right type of fish" left in Morrisons on a Sunday afternoon.

For main, I decided to try a pan-fried fish coated with coconut and spices. The fillets I did manage to get hold of (not even sure I can remember what they were now) were quite small and here comes mistake number one, I cut them into chunks rather than treat them as whole fillets. So when it came to rolling them in the desiccated coconut and spice mix and shallow frying, what a mess! 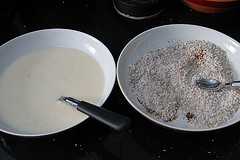 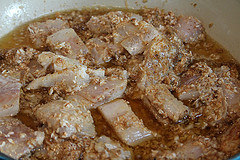 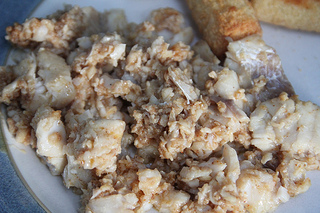 Although it didn't look that appetising, it didn't taste too bad. But not really what I would call a success.
A traditional dessert for the Cook Islands is something called Poke. Poke  is cooked bananas mixed with milk, thickened with arrowroot, and sweetened with sugar that's then baked and served in coconut milk. The recipe calls for you boil bananas until they go purple and then blend them with the other ingredients and bake.  After about 45 minutes of boiling and boiling, there was no sign of my bananas turning anything like a shade of purple. I tried to add the arrowroot and carry on with the baking, but again after much cooking, it was so runny and revolting...it ended up straight in the bin. 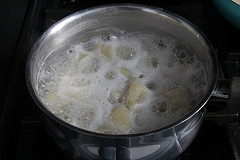 ﻿
Not good cooking at all. Sorry Cook Islands, I'm sure you all do much better with your Poke!