I freely admit, we'd been putting Cameroon off - slightly unfairly, merely a reluctance to spend an evening in Deptford. But given that we had Canada already in the diary, it meant squeezing this one in on a chilly November Wednesday evening. Straight from work, James and I trained it to Deptford, I'd managed to misread the map and we ended up at the wrong station, we should have actually headed for the DLR Deptford Bridge, but no matter, it wasn't more than a 5 minute scuttle along Deptford High Street to Maestro Bar and Restaurant. 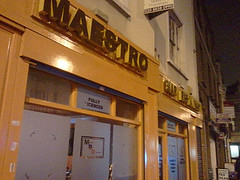 We found it easy enough, although on first glance it looked shut. It might as well have been, really quite a sizeable place, but no sign of any other diners. Still, we'd made it here without incident, so headed inside. There were a couple of people propping up the bar, the waitress and a friend, chattering away in French. They turned and gave us some very puzzled looks but after asking for a table for two, were allowed to choose our seats. We sat where we would have a prime view of MTV Base, blaring out in poorly dubbed French.

No Cameroonian beer on the menu, unfortunately, so we settle for a couple of Kronenbourg 1664 and perused the menu.
This was the only Cameroonian restaurant I could find in London and admittedly, the menu was true to that claim. James chose pepper soup to start and I had a plate of Ntaba (grilled goat). Mine was a generous plate of chunks of meat, heavily spiced with little dishes of more spice to dip them in. James's soup.....hmm, well it definitely had pepper in it. But it also had a mountain of TONGUE. No mention of that on the menu. Although, he did say that it was perfectly edible, and better than the tongue we had tried back in Bulgaria.
For main course, I chose a traditional dish of Ndole (little bit like a spinach curry) with some very tasty alloko (fried plantain) and James had Soukouya de mouton (a very similar looking dish  of goat chunks as my starter). 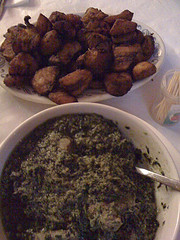 After the mountain of meat and a couple more beers, there was no room for pudding (I can't actually remember being offered any). We settled up and scuttled back up the High Street to get a train back to James's. 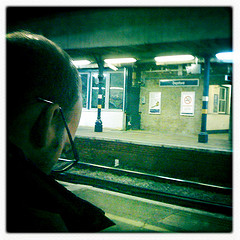 Overall, it was a very odd evening. I think we completely confused the waitress as to why we were even there, almost felt we were a nuisance. It wasn't a particularly cheap meal either, for what were some very scraggy cuts of meat. Maybe on a weekend, the place is buzzing, but this isn't one we'll be hurrying back to.

Posted by lourobbo at 21:03 No comments: