We have actually been slowly progressing through "C", but I have been particularly slack at writing up the blog. We actually visited Canada back in November....

Ahhh, The Maple Leaf, a blast from the past. Again, seemingly the only place in London badged as Canadian, I can't say this place is new to me, it was frequent haunt during the mid 90s when I used to work out of our Embankment office. But it's a memory I associate more with the beer than the food. 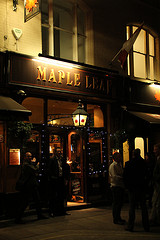 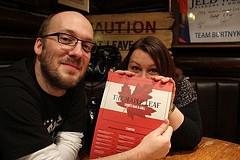 Because of the strong links with days gone by, I decided to invite along a few of my pals from work. Ian also brought along his fiancee, Erin, who just so happens to be Canadian! I wanted her view on whether it was anything like authentic cuisine 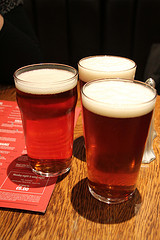 Let's start with the beer. I went expecting it to be a Molson and Labatts shop, but Sleeman's was actually the main beer on tap. Here is a shot of 3 lovely pints of the stuff.
And the happy drinkers tucking into the first round. The first of several... 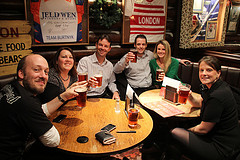 But before we get carried away with the pints, what about the food? Overall, it seemed like standard North American fare - burgers, ribs etc. But the one thing we did have to try - the famous Quebecian dish of Poutine! A plate of chips smothered in gravy and melted cheese. Looks revolting, tastes devine. 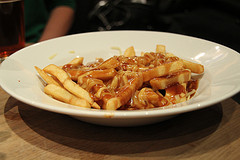 Not to be confused with/pronouced as Poutain. Which means something else entirely.
The ribs were also pretty good (if a bit fatty). Here's Brendan tucking in to a plate of BBQ'd meat.
﻿ 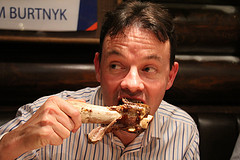 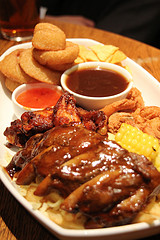 After many more beers, we still had room to squeeze in dessert, and dessert in Canada usually means something swimming in maple syrup. We opted for a couple of these whoppers: 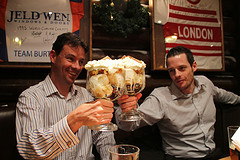 Choclate sauce, ice cream, nuts, cream, chocolate brownie, marshmallows and of course maple syrup. Tasted good. But after 6 pints of Sleemans, most things probably would.﻿
It's fair to say, an excellent Friday night out was had by all. Erin thought the poutine wasn't bad, not the best ever, but fine for a Covent Garden tourist trap. And although the food wasn't quite michelin standard, it was quite cheap. Atmosphere-wise, The Maple Leaf was as rammed as ever, thankfully I'd booked a table. It still had that air of a Friday night cattle market, ice hockey on the many screens and a wide ranging mix of music loud enough so that it was difficult to hold a conversation. After the second round, that didn't seem to matter.
Food: ***
Value for money: ****
Atmosphere: ****

Posted by lourobbo at 16:59 No comments: