Can you actually believe it? Finally, finally I've returned to Eating the A to Z of London challenge. Last week at work we had a "Show the Thing" session and Jacky challenged us all to say something that nobody in the the team knew about us...and the only thing that popped into my brain was my eating in every country blog. And having "remembered it", prompted me into action and I booked a Friday night dinner at the Aphrodite Taverna in Bayswater. 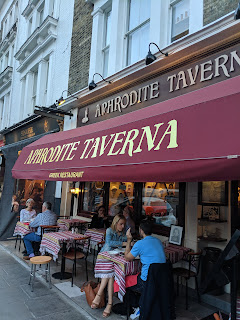 As I suspected, there was plenty of choice in London for a Cypriot restaurant. But I liked the look of the Aphrodite Taverna - not too far from home and very much a local family run restaurant serving authentic cuisine. I must admit, I felt a touch guilty about this one. We did actually cover Cyprus several years ago when Nic and Dimi invited us over for some proper homemade fare when Dimi's mum was over visiting. It was a splendid evening and we ate like champions, but unfortunately, I seem to have totally mislaid the photos. I think for some reason I was using James' Canon that night for and not sure what happened to them. So, sorry to the Androutsos', I should have written it up at the time, then we might have been further on than still languishing at the end of the Cs! 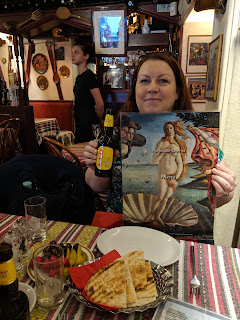 Even though we were quite early arriving in Bayswater, having we hoped booked a table for 6.30, the were already a number of diners tucking into their food. It was quite a warm night, but decided to sit inside, given my love's aversion to "nature" with dinner.

It was a warm welcome, and very quickly we were given some olives, stuffed peppers, a mixture of beans and beautiful (and hot) flat breads as the cover. We decided to start with some Keos (having spent several fantastic holidays in Cyprus, I recognised that beer immediately). 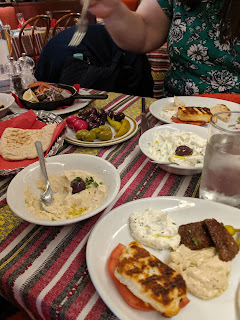 We decided against the Meze as it would have meant Suzanne missing out on most of it, Cyprus favouring lamb in a number of their dishes. But instead, chose a selection of starters to share between us. The regular favourites of Tzatziki, Houmous and Halloumi, together with Bastourma, a spicy beef sausage that was totally moreish. And baskets and baskets of that delicious hot bread... 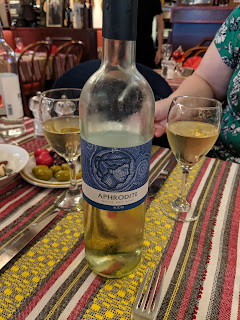 After that starter, we were all feeling pretty full (I just can't resist hot bread with houmous) but on to the main courses. We also moved onto wine at this point and despite a little reluctance from my companions, I chose the Cypriot white, Aphrodite. Would it taste as good when not sitting in 35 degree heat round a pool in Paphos? Probably not, but hey we're here for the full experience.


The mains were delivered by our host and the owner chef of Aphrodite Taverna, Pantelis. You can tell he is proud of the food he is serving up to his customers, and so he should be. We all had different dishes, Suzanne opting for Sea Bass with roast potatoes, James chose Afelia (a grilled pork dish with rice) and I had the mixed Souvla, spit roasted lamb and chicken, again with roasties. 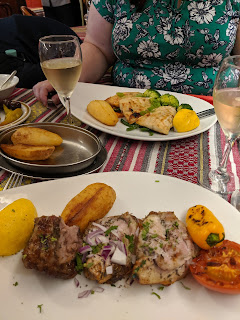 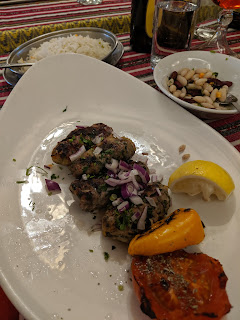 And finally, I felt like something sweet to finish off our meal at the Aphrodite Taverna. So ordered some Galactobureko and we were also given some Cypriot Delight. All round a lovely night out for Cyprus. 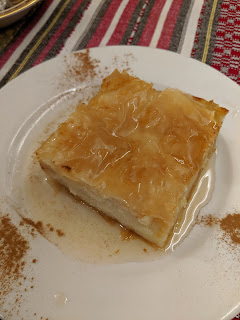 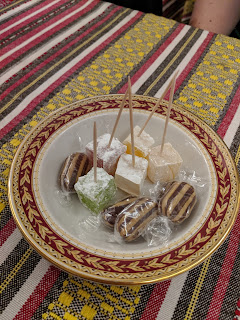 Let's hope I can keep this enthusiasm up and get to Czechia (formerly known as Czech Republic) in the next couple of weeks!

Posted by lourobbo at 19:40 No comments: