Cheating a little here and combining the two recognised countries of Congo - The Democratic Republic of Congo (formerly Zaire) and the Republic of Congo. The main reason why? I could only actually find one restaurant in the entire of London that claimed to serve Congolese food, although I am sure there are actually lots. As mentioned in previous posts, trying to find African restaurants that specialise in a particular country's cuisine is like looking for a needle in a haystack, there are so many out there but the majority do not have web presence and unless you can find it on another blog or it's a personal recommendation, a tricky task! So, I'm being a little lazy, La Kinoise is covering off two countries for me....and I still have no idea which one it really belongs to. 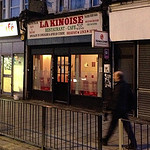 La Kinoise is in Forest Gate, far over to the east of London. This just so happens to be the home patch of a couple of friends, Umbreen and Adrian, so James and I took the tube and train from work over to the station on a random Thursday night to meet up with them. We started off the evening with a few beers from the local Wetherspoons, The Hudson Bay, before a short walk down Upton Lane to the restaurant.

La Kinoise is right on the edge of town in a mostly residential part of Forest Gate, and therefore, unsurprisingly, pretty empty when we arrived. A couple of people were propping up the bar so we ventured inside.

"You want to eat? We usually only cook on Friday evenings. But hey, sit down". Or something like that. Anyway, buoyed up with a couple of beers under our belt, we pulled two tables together and sat down. The lovely lady owner/chef/waitress brought over some menus for the drinks, and the food - well she could do us goat and cassava ("Have we got any plantains?" "Yeah, yeah, we got plantains"). Let's have goat and cassava then. Definitely proper Congolese dishes, she assured us.

Unfortunately, there didn't appear to be any Congolese beer or other drinks on offer, so I settled for a big Leffe, James and Adrian had Heineken and Umbreen had her own carton of pineapple juice. We actually think they even ran out to get these....although the bar looked well stocked with spirits. We were treated to a Congolese music TV channel showing endless videos of Tabu Ley Rochereau, an ageing yet prolific songwriter from the Democratic Republic of Congo. 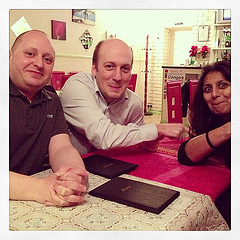 So we cracked on with the beer. Our hostess disappeared into the kitchen. And we waited. And waited. And eventually, the mountains of food started to arrive... 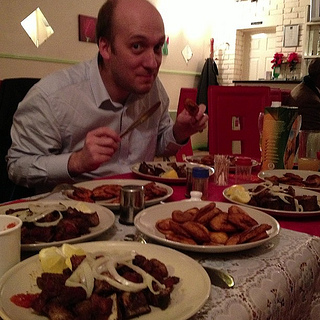 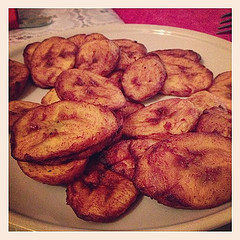 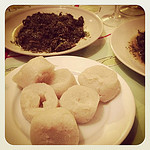 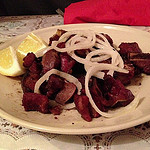 There was an enormous plate of goat (with onions and lemon) and plantains EACH. Plus a plate of cassava bread - this is where the cassava root flour is boiled and made into a doughy substance. And plates of the cassava leaves, stewed up with smoked fish (anchovies).
There was a mixed reception amongst our diners to the dishes. I quite enjoyed the goat, expecting it to be similar to lamb, but in fact it wasn't as fatty and a stronger flavoured meat. I'm not sure how the chef cooked it, but it had a slightly spiced/BBQ flavour. The downsides, it had lots of bones and to be honest the quantity was a little daunting. Everybody liked the plantains, and having had a few varieties of these on our Eating the A to Z tour, they were up there amongst the best I've had. I don't think we were that enamoured with the cassava, maybe it was due to being full up with goat. The leaves were heavily flavoured with the anchovies, salty and not that tasty. The dough - tasteless.
But overall, I applaud La Kinoise for pulling out the stops for us - showing up on a Thursday night with no reservation and expecting to be fed. I'm not sure we'll be hurrying back, but anyone who lives in the area or fancies some authentic Congolese food, I heartily recommend it. Cheap too - even with a few beers, the whole shebang only came to £54. And it was a LOT of food.
Food: ***
Atmosphere:**
Value for money:****
Can't find La Kinoise on Urbanspoon. But I'd be giving it a thumbs up.
Posted by lourobbo at 16:05