Owing to the lack of Antarctican recipes in wide circulation, I decided to combine the repulsive Antarctican Old Fashion cocktails with food from Antigua and Barbuda.

Another Caribbean country, another browse of the internet for a suitable menu. I settled on a one pot recipe - Antiguan seasoned rice for the main. This dish has a vast quantity of ingredients, some quite obscure such as pigs trotters and snout, which I substituted with bacon. It was also a bizarre combination of meats - chicken, salt beef and flaked smoked haddock. as well as the pork influences. 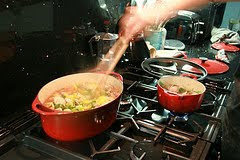 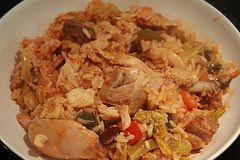 The pot was easy enough to make, and looked good enough to eat. But for a meal with so many ingredients, I was a tad disappointed, it was too bland. James and Suzanne seemed to like it though. I'd made loads - plenty left over for lunch the next day and I did think it actually tasted better reheated and with a large dash of habanero chilli sauce on top. It definitely needed that extra kick.
I attempted a very traditional dessert for Antigua - Ducana. And served this with a tropical pineapple salad. 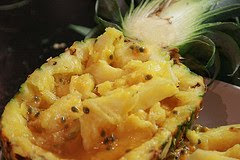 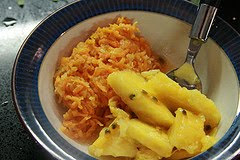 The pineapple was great, no doubt because of the lashings of rum it was marinaded in. The Ducana, however, wasn't such a hit. I'm really struggling with these coconut puddings, never seem to achieve the right consistency. I imagined it to be far more of a biscuit/cake, but whether I didn't cook it for long enough or had too much coconut in the mix, it fell apart in the bowl. It was overly sweet too.

So all in all, Antigua and Barbuda from lourobbo's kitchen isn't going to make the top 10.

We're all very excited about the next A on the list - Argentina. Caroline suggested Santa Maria del Sur,  in Battersea. Luckily I've booked ahead, it's extremely popular. Bodes well for some decent steak washed down with a glass or two of malbec.
Posted by lourobbo at 22:23