I can categorically state that tonight I ate the best steak in the world, ever. Fact. 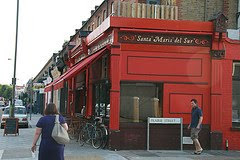 Caroline, having spent several weeks in Argentina on her travels last year, hunted out the best restaurants in London serving up  the cuisine. She recommended Santa Maria del Sur to us - a spin off restaurant to the original London Argentinian steakhouse in Hackney - Buen Ayre. It's about 5 minutes walk from the station, on Queenstown Road in Battersea.
You definitely need to book. It's not that tiny, but fairly cramped and there aren't many big tables. We ended up taking a table at 6.30pm on Tuesday night on the proviso that we were out by 8.30pm. The place was already buzzing when we arrived. Top marks for decor and atmosphere, the walls were painted a dark rustic red and adorned with lots of paintings of cows, just to remind you what you're eating. Staff were friendly and efficient and there was no problem eating a 3 course meal and coffees in our two hour slot. 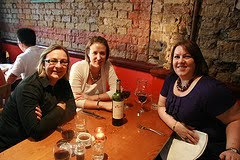 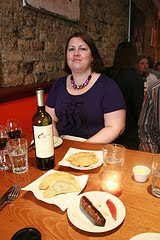 On to the food. To start, we sampled all 4 types of Empanadas - chicken, beef, spinach & cheese, sweetcorn. They were delicious - hot, sizeable portions and lovely light cripsy pastry. If I had to pick a favourite, it would probably be the chicken. Nicely minced up with a good kick of chilli. We also ordered, a portion of chorizo, again very spicy and made a good precursor for the meat to come. 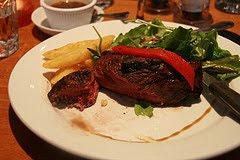 Then for the main event, STEAK. All 4 of us went with the fillet, 3 medium rares, James went the full hog and opted for rare. This was 10ozs of pure delight. Great thick slab of meat that had been cooked perfectly, juicy and velvety, with the richest, darkest colour.
We added a couple of sides that were equally good - rocket and garlic salad, tomato and red onion salad and a bowl of superbly cooked chips. All washed down with the must-have of wines from Argentina to match steak, malbec.
We didn't have a great deal of room for dessert after the meat feast, but they sounded so yummy, we had to try and squeeze them in. There's a theme based on dulce de leche - that delicious runny toffee you get from boiling cans of condensed milk. James had it with pancakes and in his espresso, Suzanne had the ice cream version, I had mine with creme caramel. Caroline just stuck to the chilled port, malmado malbec (which of course, I had to taste too). All good. Now we were bursting at the seams. 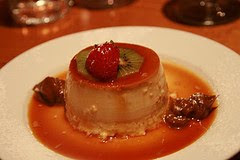 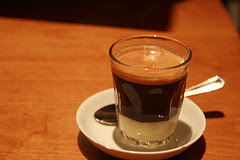 This really was first class steak. I've eaten quite a lot of the stuff - plenty in exceptionally good restaurants in Texas, that at the time, I thought couldn't be beat. But this was in a league of it's own.

It's interesting to see Santa Maria del Sur has quite a mixed set of reviews on Urban Spoon and from other food bloggers. Maybe I'm not fussy, but I would struggle to find fault with the entire experience.

If you are craving the perfect steak....you must take a trip to the south and Santa Maria del Sur. In the aid of research and for completeness, I think we need to do a compare and contrast with Buen Ayre Hackney. Wrong to have a double helping of Argentina?