It's taken an age to get here, but at last we are onto a new letter "C". First up, Cambodia, and luckily we found a restaurant that had pretty good write ups on several sites and blogs. It's called Lemongrass (not to be confused with our favourite lunchtime haunt in Docklands of the same name). This one is in Camden Town.

After quite horrendous journeys on London Transport, we met up in Camden early on a Thursday evening, to try out some Cambodian tucker. The restaurant is a 5 minute walk from Camden tube, on Royal College Street, situated in a parade of slightly run down Georgian style townhouses. 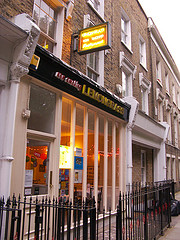 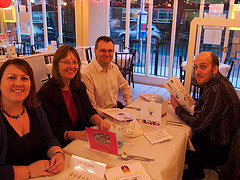 Although empty when we arrived, we were there early and Lemongrass, being a bijou place, the tables soon filled up. The decor is plain but it did have a few strings of fairy lights to give a little atmosphere. What did stand out was the open access to the kitchen, with a "noodle of woks" on display (couldn't find a collective noun for woks!) 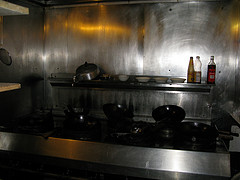 Lemongrass does suffer from being understaffed. One very busy chef appeared to be doing all the prep and all the cooking, one very busy waitress doubling up as table clearer and washer-upper. Although our beers and starters appeared in reasonable time, when we got to the main course, the restaurant was full and the staff were obviously struggling to cope.
There were a few dishes on the menu labelled specifically as Cambodian, so of course we had to try those. Mixed starters, including golden triangles, and some Cambodian Prawn Soup for first course. 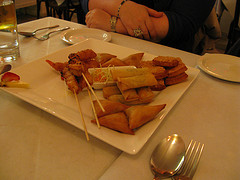 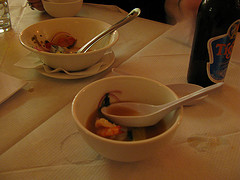 This was by no means the best platter of Asian starters I've ever eaten. I felt they were somewhat bland and being a self confessed connoisseur of spring rolls, the pastry was a touch soggy and stingy on the filling. However, the soup was good, and enough for us all to have a couple of ladles full.
The mains were a step up, we had Phnom Penh chicken, Lok Luk steak, with some rice, noodles and the intriguingly named "Buddhist Cabbage". The steak was particularly tender, the chicken a bit too sweet for my taste buds. 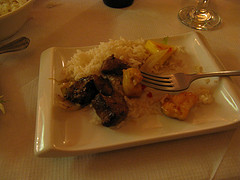 I may stir up some alternative opinions from my friends and family with this post....I hate to admit it but I was slightly disappointed with Lemongrass. It wasn't bad....but it wasn't excellent either. Given the favourable reviews I'd read, my expectations were high, and Lemongrass just didn't cut it. Perhaps it's blasphemous to compare, but I have had significantly better meals at the tiny Thai restaurant at the end of my road. And given this purports to be the only Cambodian restaurant in the UK, I'm going to have to visit Cambodia to make an informed decision as to whether I like this cuisine or not. What a chore.......now, where are those travel brochures?
To the scores. Middle of the road:
Food: ***
Value for money: ***
Atmosphere: ***

18 in all. 6 restaurants and 12 home cooked meals. It took us a while, but we're now at the end of B and raring to get onto C. Now for a look back over the B highlights and lowlights.

First the restaurants. We have a tie for first place with Brouge (Belgium) and Arda 2 (Bulgaria) both scoring 12 out of 15 points. Brouge scored consistently across all 3 categories. Another worthy mention for Reema Balti House (Bangladesh) just off Brick Lane, certainly the best value for money of our B venues. No real disasters for eating out in B countries.

Of the kitchen experiments, I particularly liked some of the early B fare - one pot chicken dish from Bahrain and a mushroom pork cutlet recipe for Belarus.

And the worst dish, one I won't be repeating - boring rice and beans from Belize.

I'm very much looking forward to the first of the C restaurants, we've picked out a restaurant in Camden called Lemongrass, representing Cambodia that gets some good write-ups. Might well take a trip up there Saturday evening if anyone fancies joining us.
Posted by lourobbo at 22:24 No comments:

Woooo! Finally we're on to the last B and it's Burundi. I've been looking forward to this for a few weeks now, as there are a number of restaurants lined up for the start of C.

Burundi cuisine is heavy on the beans, but I did manage to find an appetising looking tuna recipe to go with them. 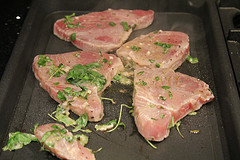 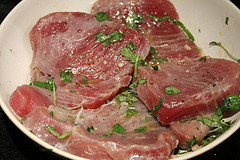 The tuna was marinaded for an hour in a red wine/garlic/herb mix and then grilled  and served with a mayonnaise aioli. 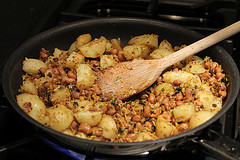 Black eyed peas, potatoes, dessicated coconut together with a variety of spices made a tasty accompaniment.

Not a bad way to finish up B for Burundi! 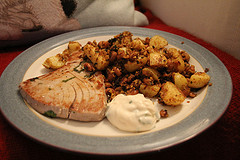 Posted by lourobbo at 22:00 No comments: