So lucky for me that we have reached Anguilla, as lobster is a main stay. We're on a run of home-cooking at the moment and not likely to find a restaurant in London until Argentina week. But I have stumbled across an excellent website Caribbeanchoice.com that has loads of recipes, all categorised by island. This is going to make the A to Z task significantly easier - lots of islands, not many specific London restaurants! The Caribbean is going to involve a lot of cooking. 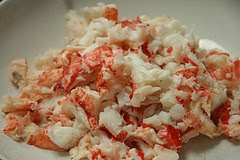 I've never actually cooked lobster before, but Waitrose came up trumps with some fresh lobster tails. Easy to pop in a pot of boiling water for a few minutes and they turn that lovely pink colour.
I decided on lobster cakes for the main course, mixing the chopped lobster meat with the rest of the ingredients which included peppers, spring onions, a white sauce, breadcrumbs with a large pinch of cayenne pepper to give it some heat.
Fried the cakes on the hot plate until they were golden brown on both sides and then served up with a tartar sauce and a green salad. 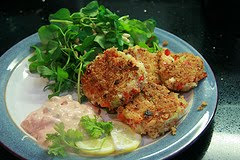 Warm Chocolate Pie for afters...more breadcrumbs in this recipe and no flour. I started to worry when it didn't look as though it was rising. But the end result was very brownie-like, great with vanilla ice cream. The leftovers will be making their way to the Docklands office tomorrow! 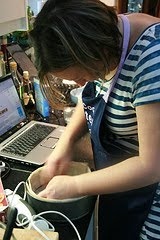 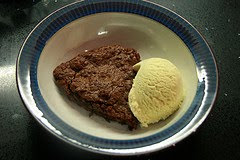 I thoroughly enjoyed cooking from Anguilla, and it's certainly given me the confidence to cook with lobster again. It looks like a fabulous place to visit, the beaches are some of the most beautiful in the Caribbean and if they serve lobster by the pot load, seems like a good reason to add it to the holiday wish list.

Next stop - Antarctica!
Posted by lourobbo at 22:45