Another night in, this time at James's place in Greenwich. And the food I'm attempting? Angolan.

There are plenty of recipe choices for Angola, and the Portuguese influence is clear in that many of the main dishes include hot chilli and spices. I settled on two savoury plates, served with some plain rice. 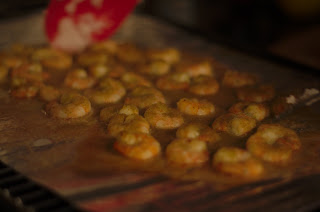 Camaro grelhado com mohlo cru (grilled prawns with raw sauce), quick and easy to make, brushing the prawns with a marinade of spring onions, cumin,white wine vinegar, salt and water. These should really have been shell-on king prawns, skewered and cooked on a BBQ. But overall, plenty of flavour and a recipe keeper. 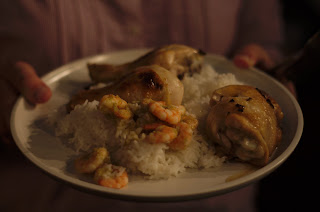 The second main, a typical Angolan chicken dish, Frango Grelhado Piri Piri. This was very basic grilled chicken with a spicy rub of lemon juice and what should have been habanero chillis. I couldn't find any in Sainsbury's, but they did have some rather powerful scotch bonnet peppers which did the job. Again, tasty and quick to make. 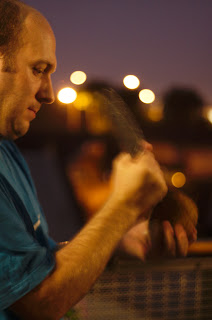 So main course a relative success...on to pudding. A quote from my beloved...."it looks like someone has thrown up in a bowl". Actually, it's Cocada Amarela (yellow coconut pudding). A concoction of coconut, sugar, egg yolks and spices. The first problem, how to get to the coconut flesh. James's first attempt pictured here, tapping along the coconut seam with a knife handle. No joy. Second plan, take coconut down to the street and whack it on the kerb. That worked. 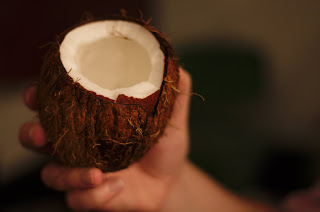 It was described as a coconut egg custard but mine separated and ended up more like sweet scrambled egg with coconut bits. I'm sure this is not how it was supposed to turn out. I blame it on the tools (not my kitchen, guv) and chef's impatience in waiting for the sugar syrup to reduce down.  Not the worst thing I've ever tasted, but too strange a texture. This isn't one for the recipe book. 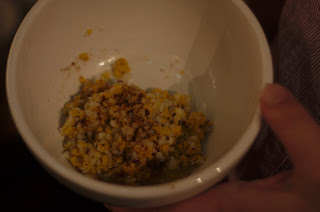 Overall, Angola not a great success, but the blame here lies with the cook, not the recipes. I'd do the prawns again, they were good and hot (although I'd make sure I used shelled king prawns next time, and leave to marinade for longer).

Photos this week courtesy of RealJimBob.
More home cooking for the next country, Anguilla. And I'm thinking lobster...
Posted by lourobbo at 10:10