This is without doubt the poshest Chinese I've been to.  With a splendid view over Kensington Gardens and the London skyline, Min Jiang is situated on the 10th floor of the Royal Garden Hotel, Kensington. No doubt it would have been even better if we'd been there in daylight.

We had originally booked to go with a large crowd a couple of Fridays ago, but alas, a freak snowstorm in London meant the transport system was unreliable for getting home afterwards, so we postponed. Unfortunately, it proved difficult to co-ordinate the diaries of 8 people and now we are back on this journey, I was keen not to delay any longer and finally, I secured an early table on a Tuesday evening. You do need to book Min Jiang, it was very busy, full of business diners at the immaculate white-clothed tables.

It was always going to be tricky to pick a Chinese restaurant in London with all that choice, but I relied on my good friend Soo Lim to do the recommending. I always had in mind that with some of these more bountiful cuisines, that we would try and sample something at the top end, a restaurant widely regarded as the best of the bunch. Min Jiang certainly fit that description in my opinion. 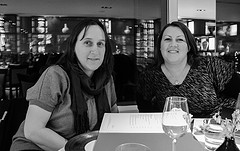 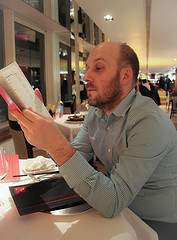 We were shown to our table next to the panoramic window, unfortunately you can't see the view behind Faith and Suzanne because of the reflection. But it was stunning, uninterrupted London skyline with clear views of the Post Office tower, to the Shard and the towers of Canary Wharf in the distance. James studies the menu - no set menus here!﻿ 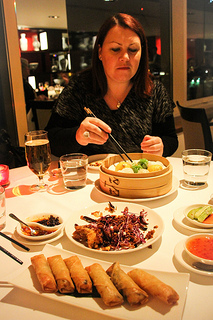 Let's talk about the food, as that was definitely the main attraction of Min Jiang. Suzanne tucks into the delightful appetisers. We had a dim sum selection, the obligatory spring rolls (well, obligatory if I'm at the party) and the most delicious soft shell crab I've ever tasted. It was a sizeable plate of shell fish and served with moreish deep fried chillies and red cabbage. The spring rolls were top notch, great crispy pastry with piping hot filling. And a mixed plate of dim sum with vegetable and sea food fillings. All in all, a superb start to the meal.


Min Jiang is apparently famous for it's duck course, and given that has to be one of my favourite things about Chinese cuisine (even if it's not altogether authentic), I awaited the middle course with eager anticipation. It did not disappoint. 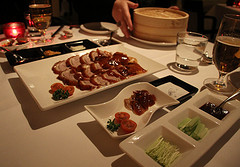 A key difference in the way they present this course to you at Min Jiang is how they split the half or whole duck you order into 3 separate dishes. First off, a taster of the skin of the duck - you can see it in the small dish above with a couple of tomato halves on the plate. The waiter encouraged us to dip the small pieces of crispy duck skin in sugar. Odd. But surprisingly tasty, the only way I could describe it is liking eating doughnuts (which I guess isn't a huge leap of the imagination as that is exactly what doughnuts are - fat and sugar!). This was followed by some slices of duck meat, served in the more recognisable way with plum sauce, spring onions and cucumber, wrapped in the finest pancakes. All good. But to top of this part of the duck extravaganza, they also provided an alternative set of ingredients to add to the pancakes, duck and plum sauce - white radish, ginger strips and a garlic puree. Absolutely delicious. That and the soft shell crab alone would tempt me back here.

The final part of the duck courses was actually saved for delivery with the other main course dishes. We had a choice of 4 ways as to how we wanted it served, and opted for fried up with noodles, shown in the picture below. 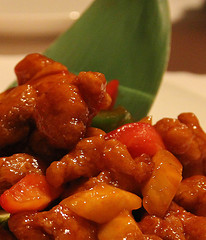 The quality of the mains were most certainly on a par with the previous courses. The sweet and sour chicken was certainly the best I have ever tasted, and we all liked the egg fried rice chock full with beautiful fresh edamame beans. The final two dishes included a fine pork belly and also some prawns in a perhaps slightly too sweet sauce. I would have liked to have tried the lobster dishes on the menu, but the price was a little prohibitive having already opted for the duck course. Dinner was all washed down with a Tiger beer and some jasmine tea to finish.

Overall, this was a fabulous meal. Where I would "mark" them down - the service is just too quick. We were in and out of the restaurant in just over an hour, and you get the distinct impression they are trying to get as many sittings into the evening as possible. It would have been nice to linger between courses. That way, I may have been tempted to have a dessert too. I'd highly recommend Min Jiang. 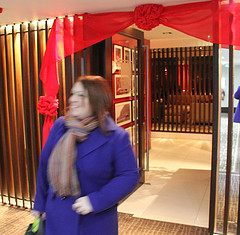 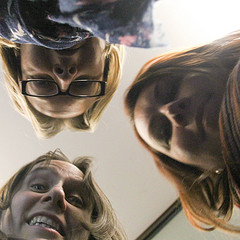 Hotel restaurants can sometimes be impersonal and often not that busy or full of lone resident diners. This was certainly not true of Min Jiang. Here's a couple of snaps of us leaving the restaurant, in the lift back down to the lobby!.

And now to the scores:

With Soo back from her travels, we decided to give Min Jiang a second go (nobody was complaining, this was great food). We chose a late Saturday lunch sitting, so we could see the view in daylight and also squeeze in a trip to Kensington Palace in the morning (well worth a visit).

I wanted to update the blog as we had a few new dishes second time round. Being lunchtime, Soo ordered a stack of dim sum for mains, including this very tasty char siu: 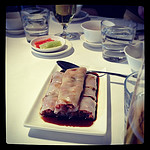 We also had time and inclination for pudding on this trip. Here are the very cute steamed custard puddings and a dish of pear and snow ears with chestnut buns: 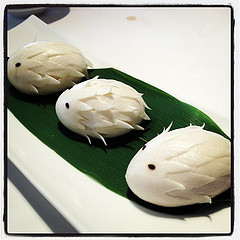 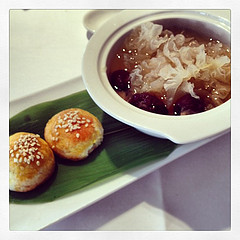 Interesting texture, those snow ears. A cross between seaweed and lychees? Certainly not something I'd be rushing to have again, although Soo said she'd get her mum to cook them if we ever end up in the same place ;-). The custard buns were a delight though.

Another successful trip to Min Jiang, I'm sticking with the same star ratings. 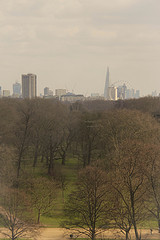 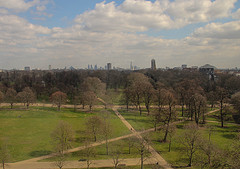