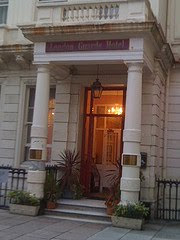 We are nearing the end of the "A's" only a few more weeks to go and this Wednesday we went in search of Armenian. Erebuni in Lancaster Gate came up a few times on other food blogs and there didn't seem to be a great deal of choice again, so we headed West to sample the delights of Armenia. The restaurant is actually in the basement of a fairly unassuming hotel, right on the Gate and serves a mix of Russian, Ukranian and Armenian food.
Suzanne was quite excited, as the restaurant website suggested that the film Eastern Promises had been shot there. She's a huge Viggo Mortensen fan, and oddly we'd only seen the film a couple of weeks ago. (Don't go in the sauna!). However, it looks like the cast might have eaten at Erebuni or the restaurant provided the food for some of the scenes....the eating area certainly bore no resemblance to the grand Russian dining room shots in the film. Rather disappointingly, owing to it's basement location and low ceilings, the restaurant felt dingy and the ambiance was not helped by the Eurovision trash blaring from from the TV. "Nil points" for atmosphere 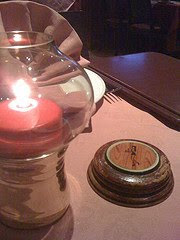 The redeeming feature of the evening was the food. Handily, the menu clearly indicated which dishes were Armenian in origin and was fairly extensive. The service was also friendly and efficient. The waitress gave us a buzzer for when we were ready to order or needed more drinks which seemed like a neat idea. We drank Viru beer, actually brewed in Estonia rather than Armenia. 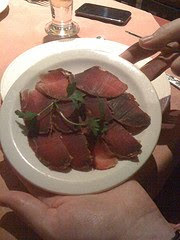 James started with Basturma (cured beef), Suzanne chose Karmir Bibar (marinated pepper) and I opted for Emanbajady (vegetarian dip). Sara was also with us, but we let her off the Armenian requirement, so she plumped for a Russian salad. All good.
The main courses had a heavy lamb bias, so Suzanne chose Chicken Tapaka, James went with lamb mince stuffed vine leaves (Dolma Echmiadzin Style) and I had Ischkan, an Armenian trout dish, baked in a tomato based sauce, which was very tasty. Sara went Ukranian with a large portion of Chicken Kiev. 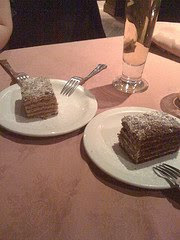 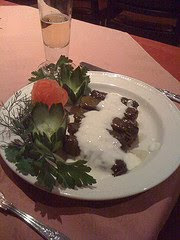 For dessert, we shared cake - Armenian Honey & Walnut and Armenian Chocolate (they were out of Baklava). A nice little extra with the bill - cranberry vodkas.
Erebuni was quiet when we arrived with only one other table occupied. But by the time we left at about 10pm, the place was filling up. Armenian's obviously like to eat late compared to us Brits.
Overall, this was not the worst restaurant experience so far on this A to Z of Eating in London... but nothing special either. So from a former republic of the Soviet Union, we're now travelling back for another visit to the Caribbean - Aruba and the Netherlands Antilles 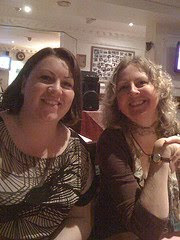