This was actually our second attempt at a Bolivian night out. Last week, we took the 21 bus from London Bridge down the Old Kent Road to search out Parrilladas del Sur. We found it. It looks like it's still in business, but that rainy Tuesday night, it was most definitely shut.
There was a second restaurant choice coming up on search, El Rincon Quiteno, on the Holloway Road. We decided to give this place a try, handy for meeting up with Sara as it's North of the river (shudder). The plan was to meet early and then head to the cinema afterwards. One slight drawback, it's actually an Ecuadorian/South American restaurant, so we've already knocked this place out as an option for Ecuador (when we get there!) 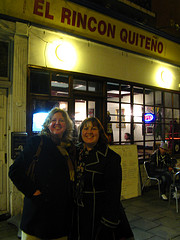 A fairly unassuming place from the outside, El Rincon Quiteno is about 100 yards from Holloway Road tube, a stone's throw away from Arsenal's Emirates stadium. The lights were blazing when we got there, a fair few people standing outside smoking and it certainly had the feel of a greasy spoon.

But a warm welcome by the friendly maitre d', we sat down and ordered the obligatory beer. Ecuadorian beer, Biela, but at least we're in the right vicinity. 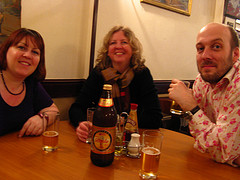 Using our trusty smartphones, we managed to pick out the Bolivian dishes from the menu. James had the one starter we could identify as definitely Bolivian, a South American take on the Cornish Pasty - Saltenas. This was a pastry, slighty sweet soft texture with a chicken and pea filling. It was served with a punchy tomato salsa. 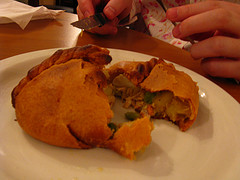 Tasty and a generous portion for a starter. Sara had a sizeable slab of spanish omelette, Suzanne had delicious beef empanadas. And I had a cheese melted on bananas (ok, plantains). Surprisingly good.

Our host turned the lights down at this point, add to the dining atmosphere and turned up the tunes. I'd hazard a guess at Ecuadorian music and we did manage to pick out a cover of  "Don't mess with my Toot Toot". Marvellous. Complete with trumpets and maracas.

For main, three of us opted for silpancho. This was a beef escalope, fried in breadcrumbs, served with rice, salsa, saute potatoes and topped with two fried eggs. And banana. Sorry, plantain. 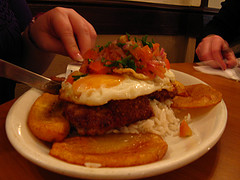 Hugely filling and although it looked an odd combination and heavy on the carbs, again it was good eating.
Finished up with some strong coffee and then staggered out of the restaurant, feeling very full. We binned the cinema, we would probably have missed the start of the film. But no loss, Bolivia a successful night out, second time round
Ooo, don't feel like I've done ratings for a while has there has been a spate of country cooking. But here are the scores on the doors for El Rincon Quiteno:
Food ***
Atmosphere ***
Value for money ***