Wow.....that was a much longer hiatus than I was anticipating. Haven't posted on here since September 2013, hopefully we're back and this kick-starts the return of the A to Z Eating of London!

Last weekend, we happened to have a bit of spare time in Waterloo, whilst waiting for the London Fire Brigade to put out a trackside fire and decided to have tea up in town before heading home. I suddenly remembered that Cubana was just around the corner. And that happened to be the last restaurant we'd visited on the A to Z....but I'd never got round to writing it up. This was the main reason we stopped actually, I was getting too far behind with the Blog.

So, we're back on it, with a second visit to Cubana! Here it is, if you've never been down the side of Waterloo, it's a colourful place, you can't miss it.

We were lucky to get a table, probably something to do with turning up at a fairly odd time on a Sunday afternoon.  If you want to visit Cubana, it's probably best to book a table than just rocking up. It's popular. Very. Not surprising as it really is a restaurant with a buzz about it. The restaurant is a ramshackle mix of different levels and this time we found ourselves up on a platform barely big enough for a table for 4, almost touching the ceiling.

I'll use a mix of photos from when we visited last weekend and 3 years ago. I'm sure you'll be pleased to know (as I was) that nothing much has changed about Cubana over that period. Classic dishes still on the menu and jugs of cocktails available with a generous happy hour(s). But why change a good thing?

Not really up for huge amounts of alcohol this time round, but I had a Cuba Libre for old times sake. Included a picture of James and Suzanne from visit 1 when we did partake of the Mojito jugs. 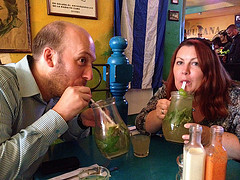 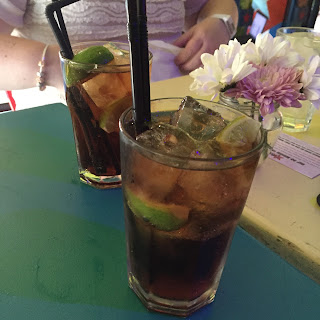 Let's talk about the food. I LOVE a croquette, can't see past them on any menu and Cubana's are fabulous. There are 2 types available at the moment - Croquetas de boniato y chorizo (sweet potato and chorizo, yum) and also Papas Rellenas (beef hash). They are a thing of beauty. 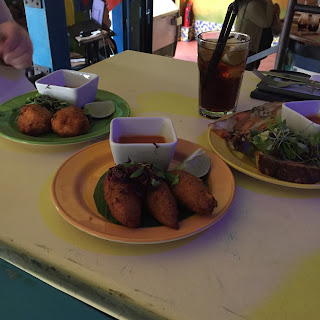 We also had Tortilla Cubana (Spanish Omelette), which was as delicious as last time. All round thumbs up for the first course again.


For mains, Suzanne and I had the same dish but she had chicken and I had prawns. James went for the same main as 3 years ago - Ropa Vieja - slow cooked beef with chilli rice, black beans and plantains. 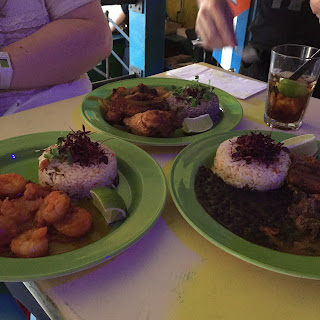 Thinking back, if I visited again, I'd probably go for all starters. There's nothing wrong at all with the main dishes, but the tapas are SOOOOO good, that I'd rather have more of those.

Although, I'd always save room for dessert here. Particularly the Fresh Lime Cream Meringue-Marshmallow Pie. Here's a picture, looks good doesn't it? 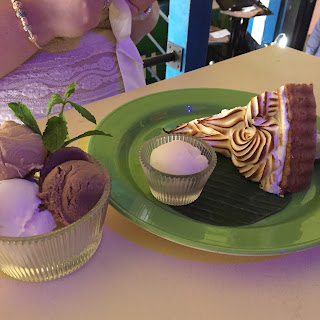 Something that does seem to have changed since I last posted on here -Urbanspoon is no longer. It seems to have been taken over by a company called Zomato. Not obvious how I link to my blog from there, so guess I won't be doing that anymore!

It's fun to be back. We did also cover Cyprus back in 2013, with a visit to Nic and Dimi's for some proper home cooked Cypriot Meze, that Dimi's mum kindly prepared. Unfortunately, I can't seem to find the photos. If I do, I'll post them up here, but we're going to try a Cypriot restaurant in Roseberry Avenue (Holborn) sometime in the next couple of weeks - I don't want to be accused of missing out any countries!
Posted by lourobbo at 14:41