We're on the home run now for C (only 4 more to go) and we're going to try and squeeze them in before our holiday in October.

I can't remember the food being particularly memorable when we visited Croatia a couple of years ago and the cuisine certainly doesn't seem to have taken London by storm. Having scoured the internet without much success,  I came across a fellow blogger on a similar challenge, eating his way round FIFA countries. who had discovered Riviera, a small restaurant on the outskirts of town in Acton.

We invited a couple of local friends, Helen and Stuart, to a Friday night trip to the West and although I was fairly confident that we'd be fine for a table, rang up to book a couple of days before. How embarrassing...I swear I'm going deaf. "Have you been to Croatia before?" the friendly man on the end of the phone asked. "Yes, I have!" (that's me). What in fact he had said was "Do I speak Croatian?" so then proceeded to talk nine to the dozen in the language. I caught the word sea bass and quickly tried to extract myself from the conversation. Friday night arrives and we meet in a Wetherspoons just up the road (The Red Lion and Pineapple) after work. A few beers down and then onto Riviera 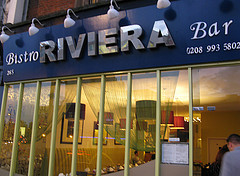 It was a little quiet when we arrived (like empty), but we received a very warm welcome from the chef - Dara Ivanovic. Once seated at a nice central table, he asked who it was he'd spoken to on the phone. "You don't speak Croatian at all do you?" I blushed and admitted my mistake, laughed a bit and sat back down fast. Dara's wife, Tomislav, runs front of house. She had popped out when we arrived but was now back to tend to our every need. We were treated like honoured guests and she certainly made the whole evening a pleasurable experience. 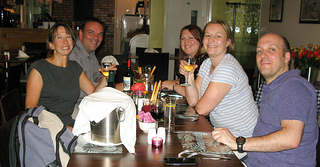 Unfortunately, no Croatian beer was available, so we switched to wine, of which there were a couple of different Croatian varieties, a white and a red: 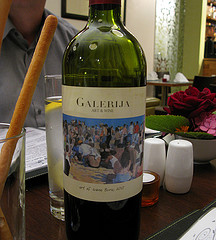 Yep, it's true what they say, you have to be drinking this stuff in the sun on holiday. It doesn't travel all that well... 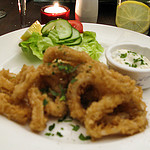 But the food at Riviera is a different matter - all freshly cooked by Dara and with some good ingredients. The starters we sampled that evening included some tasty calamari (Przeni kolutici od lignje) and whitebait (Girice). Superb batter.


And the mains definitely had that Dalmatian twist. I went for Dara's pork skewers (Raznjici) which were full of flavour. James had a dish that we certainly remember on the menu of several of the restaurants in Dubrovnik we visited - Dalmatian style entrecote steak (Brzolica po Dalmatinski), steak in a rich sauce with gnocchi as a side. 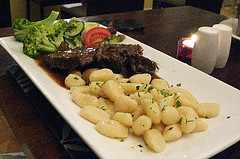 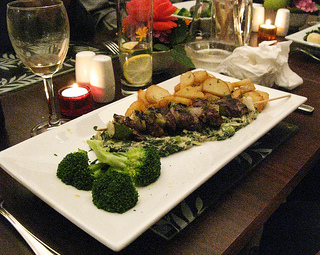 A couple of our party also had the sea bass with a lovely garlicky dressing (Lubin brancin) which went down well. Good helping of veggies and potatoes to accompany the dish. 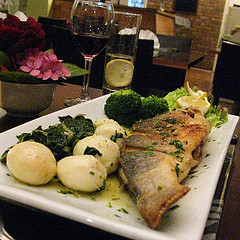 The portion sizes were pretty hefty and we certainly felt like we were getting value for money. The restaurant unfortunately didn't really get much busier for a Friday night (another couple did arrive about 9), and Tomislav explained that since a large pub opposite had closed a couple of years previously, trade had dropped off. On the bright side, a new micro brewery is due to open on the site, so there is hope that customers will return to Riviera once that is up and running.

We rounded off the meal with some pudding - unfortunately the Dalmation style crème caramel was off the menu that night - so plumped for some home made carrot cake, ice cream and some chocolate pancakes. All delicious and as you might expect, highly calorific. 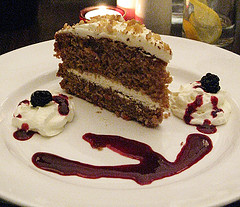 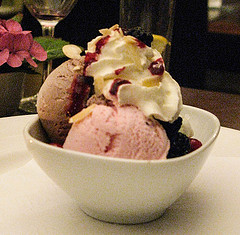 A treat at the end, as our hosts brought out some walnut liqueurs to finish (tasted like coffee). 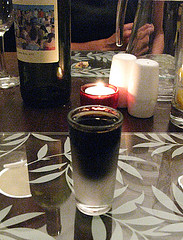 All in all, this was a lovely evening and it would be a real shame if unique restaurants like Riviera had to close through lack of custom. I hope that the microbrewery opens soon and brings a bit of life back to Acton and the Ivanovic's restaurant benefits from that.

Another one that doesn't appear to be on Urbanspoon, but would definitely have received a thumbs up!