I hate to admit it but I'd never even heard of Benin (pronounced buh-NIN), geography was never my strong point. And so it wasn't an enormous surprise that finding a Beninoise restaurant in London proved fruitless.

We had a short hiatus over Christmas, but now into 2011, let's get back on track with eating the A to Z. Benin's cuisine certainly has some French influence, I used this great website, Celtnet Recipes again to choose 3 dishes.

For main, Crabe Beninoise - a hot spicy gratin of crab, served with rice and hot sauce. 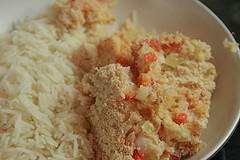 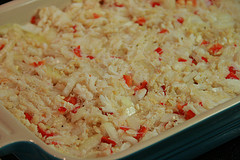 It had quite a strange texture, almost a bit too dry with the breadcrumbs. However, if you like spicy food, this is one for you, the dish itself had a heap of chili, and then topped with hot sauce (I didn't have any African sauce, but used Mexican as a stand-in), it certainly cleared the sinuses.
For pudding, we had Flan au citron. Effectively, a creme caramel with a tinge of lemon. And here the saga begins. It took me 3 attempts to get this right. The recipe calls for the mixture to be baked in a flan dish in a bain marie. So I merrily poured the creamy eggy soup into what I would consider to be a flan dish. Put it on the hob, in my biggest pan and poured some boiling water round the edge, bain marie stylee! 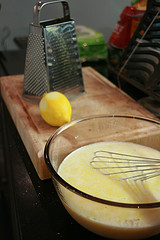 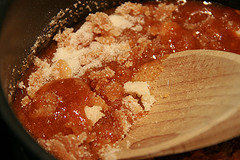 And then the loose flan dish bottom floated up and the boiling water flowed in. Disaster.
I'd also used up all the milk in the house, so had to leave it for the evening. I'd try again on Sunday.
Sunday morning - thought about the usual creme caramels you often come across in family run Italian restaurants (and trust me, I've eaten a few of these), and went for the pyrex bowl option.
Mixed up the creme, poured into the pyrex bowl and on the hob (liked a steamed pudding I thought) for 45 minutes. Made myself a cup of tea and sat down to see if flan au citron take 2 would be any better.
An hour later, still liquid. Two hours later, still liquid. I give up.
I was determined to get this right and not to waste the lovely creamy mixture. This time, turned to the internet and looked at various creme caramel recipes. Consensus seemed to be to cook in the oven, in ramekins.
And here we have the results. Third time lucky! Tasted good too. 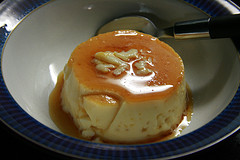 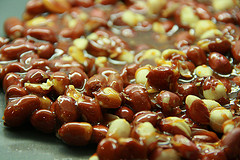 One more Benin recipe was on the menu for last weekend - Confit d'Arachide, a sweet snack of candied peanuts (I'd call it peanut brittle). Not healthy or good for your teeth in the slightest. But when was eating the A to Z ever about being good?
Benin, a mixed bag really. I learnt some things - how to pronounce Benin, and what not to do with bain maries. And we had a pretty decent meal.....eventually.
Next week, Bermuda!
Posted by lourobbo at 11:28