Another trip into the kitchen for Costa Rica, and thankfully a tad more successful than the previous foray to the Cook Islands.

Costa Rica certainly seems to have a Spanish influence over it's cuisine. For the main event, I chose Papas con Chorizo (or potatoes with sausage), both being particularly favoured ingredients in this household. It was an easy one to cook, basically fry the chorizo for about 15 minutes, then add the cubed potatoes and a heap of spices and fry some more. 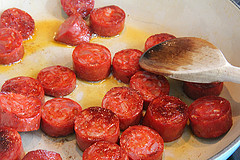 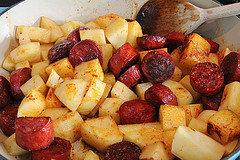 The final result was tasty, but perhaps a bit too much and actually quite dry. It could have done with a nice tomato sauce.
It did however go very well with a cheeky bottle of malbec. 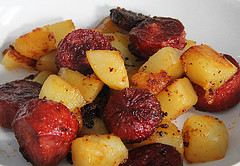 On the menu for afters, I attempted Empanadas de Pina (pineapple). These were made using a corn flour dough which was extremely difficult to work with. I'm not sure I had the dough quite wet enough as it kept crumbling when trying to roll out and fold the little parcels. The filling was pineapple jam, something I'd never noticed on the shelves of the supermarket, but Morrison's came up trumps, and it's quite delicious stuff. 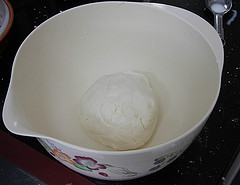 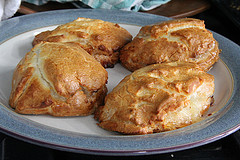 Once cooked, they didn't look too bad and they certainly smelt nice. But once again, just a bit dry and I hadn't got the pastry rolled thin enough. I'd be tempted to try these again sometime.
I reckon I'd quite like eating in Costa Rica...but these were not necessarily the easiest of dishes to cook at home.﻿
Posted by lourobbo at 15:27