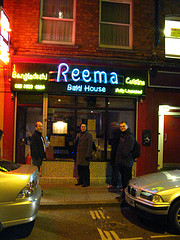 There was no real decision to be made for Bangladesh, where else would you go for a curry but to Brick Lane? Together with a group of work pals, we headed off to Shoreditch on a Wednesday night. Originally, we'd planned to try a restaurant that Umbreen had been to a few years before for her sister's wedding breakfast....but alas, it had closed down and been replaced by a Chinese.
We ran the usual gauntlet of waiters trying to tempt us in, eventually settling on Reema Balti House, actually on Hanbury Street, a side street off Brick Lane. It was probably the £10 deal that settled it - a starter, main, rice, naan, sides and 2 beers (yes, I'll say that again, 2 beers! Although admittedly small ones) all for a tenner. Originally quoted £12, magically it dropped to £10 as we got nearer the restaurant. We know a bargain when we see one!
Oops....I actually forgot to take any pictures of the food. But here are a couple of the happy diners: 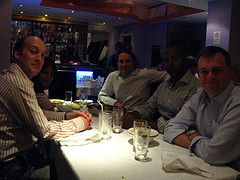 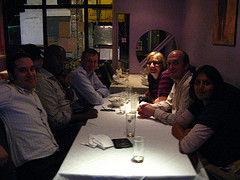 Overall, the food was pretty tasty, certainly excellent value for money. I had what was described on the menu as a traditional Bangladeshi dish - chicken tikka ureebisi gatta. The atmosphere picked up as the evening went on and more people were dragged in off the street, initially it was pretty quiet.
If you're in the area and looking for a reliable place to stop for a ruby, I'd definitely recommend the Reema. And don't forget to haggle...
Food: ***
Atmosphere: ***
Value for money: *****